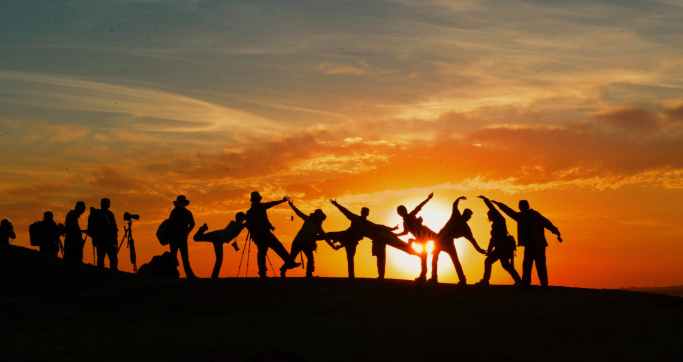 From the murky bottom of the swamp of man’s mind, there once rose a primordial “self” that began to consider itself real. There was nothing real about it; but to the mind it was very real, indeed. We could–and still do–feel its presence; for we know its thoughts even when such thoughts remain unspoken. They whisper to us, in tempting tones that would have us blindly believe in its reality. In times such as these, we can easily hear those thoughts as we go about our day; for they attempt to dominate our minds in times of anxiety or social upheaval. The thoughts of the little self speak in ways similar to this: To hell with my neighbours; they can fend for themselves, just as I’m being forced to do. I know that I can sneak out of the store with the extra package of eggs or toilet paper or whatever other item is currently in apparent short supply.” And when we exit the store, the little self smiles smugly to itself; and if it could, it would claw its way out of our cranium and pat us on the back. “Great job,” it would exclaim, ‘i’ did it–‘i’ survived!”

The problem is that we have listened to the voice of the ego for far too long. We have heeded its urges to protect our own little world, and to seek pleasure over pain at all cost. As a consequence, we have experienced–actually created–the have and have-not world that surrounds us. In the battle for survival of a fictitious self (recall that the swamp creature does not actually exist) we have individually and collectively sacrificed the intangible non-things that have true meaning: Love, Peace, Compassion, Joy, Empathy, and Generosity; all of which spring unbounded and limitless from our true identity, which is Love itself.

Consider the following: What is absolutely required for a dispute to occur within a household? Two persons, who are actually fabricated conceptual “selves” (consisting of name and form) that are irritated because each do no agree with, or clearly understand, the other’s way of being in the world. And on a larger–grotesque–scale, what is required for war to occur in the world? Two or more countries (represented by their names and collective mentalities and, thus, behaviours) that–due to their inherently greedy or intolerant natures–attempt to dominate the supposed other through violence. Logically, is not the swamp creature–individually or collectively–responsible for the respective minor or major grief that occurs in both situations? And could not both situations be entirely avoided by understanding our shared Oneness, at a level beyond the conceptual identities that arise via the mind?

For many of the us, the swamp creature may not intrude very often; but we are wise to know that it often lurks in our own mud, beneath the surface of our lives. Only the most enlightened beings have truly transcended the creature that temptingly calls to us from the primal swamp within us. We can eradicate it more easily when we understand how it behaves. The swamp creature can function overtly, and be easily witnessed in displays of anger, greed, and selfishness; or it can function more subtly, and be felt as the slimy ooze present in gossip, holier-than-though activity, and pious tales of false greatness to family and friends. No one likes a good story more than a bored swamp creature.

With practice, we can become more aware of the presence of the creature. One sure indication is a malodorous smell in the air; the unmistakable scent associated with the presence of a body-mind, or person. It is often easier to identify the traits of the swamp creature in others; but such is often a sign that our own creature is hiding nearby. The good news is that as we put our Awareness to work (not the mind!), we can more easily spot the telltale signs of our swamp creature on the prowl. Is it hinting that greed or deception is the way to operate, especially under the current conditions of our world? Is it trying to justify the purchase of a second freezer in which to stockpile frozen goods until the end of time? Is it lying, right in front of our face, when a neighbour asks if we could spare some flour or eggs? And are its claws clutching that last package of toilet paper as though it was chocolate cake…with sprinkles on top?

We are most vulnerable to attacks from the swamp creature when we are tired, stressed, hungry, and fearful. Kind of reminds us of the behaviour of little babies, doesn’t it? Our swamp creature is little different. Motivated by fear, it will rant and it will rave; it will preemptively lash out to ensure it isn’t lashed; it will coax or even threaten to get what it wants. We can, however, triumph over the creature; and every time we do, our own lives and the lives of those beautiful souls who surround us, improve dramatically. Awareness is our invincible sword, against which the creature has absolutely no defense.

The true “I” of us is so much grander than the creature. It is Divine, glorious, and eternal. It is the ever-present light within each and every one of us; the transcendent dimension that is beyond name and form, and creatures big and small. Just a thought: Perhaps today would be a good day to banish the creature forever. We can. All of us–and I most definitely include myself in these ranks–might begin by taking a whiff of the air around us. Is there a body-mind lurking?