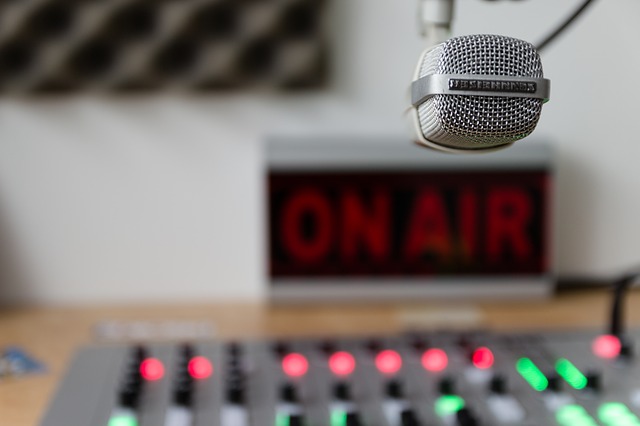 The radio host’s name was Donny Jay, which was convenient–they called him “DJ” for short. Art Russell, who was his next guest for the radio show at WK-WHY-IN-THE-WORLD, sat quietly in his chair. Across the desk from him, DJ was wrapping up his previous segment. “As always, folks, thanks for listening. We just love to serve you here at WK-WHY; the radio station that brings you the latest and the greatest music, sports, interviews, and news updates from around the corner and around the globe. Our next guest is Art Russell, a man who hails from a small town in Ontario, Canada. He’s passionate about sharing his love of Oneness.” DJ disconnected his microphone, played a 15-second taped commercial, and then signaled to Art; counting 10, 9, 8, 7, 6….” And we’re live:

“We’re so glad that you could join us for the show today.”

“Thanks for having me.”

“If you don’t mind, I’d like you to tell our listening audience a little bit about yourself.”

“Sure, DY, I’d be glad to. My name is Art Russell, from a little town in Ontario, Canada. I’m here to spread the word about Oneness.”

“That’s a good question, DY–one that stumps a lot of persons. It literally means not two–only One.”

“But how can that be?” said DJ, as he leaned toward his microphone. “I mean, it’s quite obvious that there’s a lot of separate persons and objects.”

“I hear what you’re saying, DJ. The key is that all of them take place in Consciousness–Universal Consciousness, to be exact.”

“I hope this won’t sound rude, but why do you want to spread the word about this Oneness stuff?”

“Because when Beings erroneously believe they’re a body-mind, they suffer. They’re filled with fear and anxiety about a future that’s just a concept in the mind. When more of us realize this, it will also help to end conflicts between people and facilitate peace among nations. Logically, if we knew that we are One, how could we ever go to war against one another?”

“What do you mean by body-mind?”

“That’s another term for a person, DJ.”

“I see. So let me get this straight, you don’t think we should consider ourselves as persons?”

DJ’s eyes rolled upward, his head slid askew. “So what do you think we are, then?”

“And…you can prove this?”

“No, DJ, I can’t. But our essential nature can be experienced–directly–if persons will take the time to be still. When we meditate, it becomes quite obvious that we can witness sensations, images, feelings, and thoughts. We are That–the witness. Our modern world has had it backward for centuries. We’ve been led to believe that a fictional substance called matter, which is actually rendered by the mind, somehow magically gives rise to consciousness within the body-mind. It doesn’t. Consciousness gives rise to the mind, and then the body. They both appear in Consciousness.”

“That’s quite the statement you’re making. Just for the record, you didn’t happen to pop one or two of those station brownies while you were waiting for this interview to begin, did you?”

“Yes, that’s what I’m saying. It’s actually rendered via the mind. Maybe a quote from the Tibetan Book of the Dead will help: Phenomena only exist in the mind that perceives them.”

“Wowsers, Art. Now, you’re scaring me! Maybe I should have one of those brownies.”

“You might want to have two, DJ,” Art said, smiling.

“This is pretty radical stuff you’re sharing with us.”

“Definitely is,” said Art. “Let me see if I can help. Have you ever considered how eyesight works?”

“Neither did I, until about ten years ago. You see, DJ, most persons believe that there’s a little “i” running around somewhere behind their forehead who’s looking out at a world.”

“No, there’s not. That’s the fictional self; sometimes called the ghost in the mechanism. As far as the body-mind is concerned, it’s actually more like a camera than a photographer. Just bear with me for a moment and truly consider how you see…anything. When the eyelids open, light enters the eyes. Through neural and chemical processes, light is then translated into a variety of forms and shapes at lightning speed. What we believe that we experience as an outside world is actually rendered within the mind.”

DJ fanned his hands at the equipment and the walls of the booth. “So, let me get this straight. You’re saying that all of this is occurring within the mind.”

“Yup,” said Art, “that’s what I’m saying. Every form we experience is merely a representation. Perception is our world. That’s at the heart of the teachings of the Law of Attraction. It’s why we can change the quality of our so-called lives by changing the quality of our minds. We have absolutely no way of proving anything beyond it exists.”

“Have you considered visiting a doctor, Art? Maybe getting a little check-up?”

Once again Art smiled. “I know what this sounds like, DJ–it sounds crazy; but it isn’t. The world that you see around you isn’t solid. It’s made of light, interpretted as form. The famous Double-Slit Experiment proves it.”

“It was first performed by Thomas Young…in 1801, I believe. He was a physicist who set up an experiment to determine if light was a wave or a particle.”

“More research into the experiment in the early 1900’s gave birth to the field of science called quantum physics. Subsequent experiments found that light contains packets of energy called quanta–it’s actually the basis of everything in our world. They’re called waves of probability. Atoms, which people once believed to be the foundation of matter, are actually 99.999% empty space. They’re more appropriately called clouds of energy.

“You mean like this?” said DJ, as he tapped the top of his desk.

“Exactly,” said Art. “Everything in this world is made of energy–including our body-minds.”

“Because this–Earth–is a dream world. The ancient sages had a term for it–‘Maya, in Sanskrit, which is loosely translated as illusion. You might feel more comfortable calling it a simulation. Nick Bostrum, Elon Musk, Donald Hoffman, and Dr. Bruce Litpon are only a few of the many persons who realize this is true. There’s only Consciousness, DJ. It’s the only reality. Basically you can’t be who you think you are. The good news, however, is that you can recognize the Truth that you’re an eternal Spirit. You couldn’t die if you wanted to–only the idea of a person dies. We suffer in degree to our ignorance of the true nature of our Being.”

DJ’s eyes were as big as saucers. “Okay, folks, it looks as though we’re just about outta time. Our guest today has been Art Russell. We’ve been talking about non-duality. I’m your host, Donny Jay. Next up…”

Special Note: If you’re curious about learning more about non-duality and our essential nature, there’s an abundance of great books on the subject. Authors and gurus such as Rupert Spira (The Nature of Consciousness); Eckhart Tolle (The Power of Now); Sri Nisargadatta Maharaj (I Am That); Ramesh S. Balsekar (The Ultimate Understanding); Fritjof Capra (The Tao of Physics); Wei Wu Wei (Open Secret); Sri Ramana Maharshi (Who Am I?); and Joel Goldsmith (The Mystical I) spring to mind. To that list, i humbly offer my own book listed below.